I keep reading over the years how there’s huge delays in getting stuff pressed up for vinyl. I believe this is often caused by the majors putting in bulk orders of ‘big’ records, Adele and the like.

I wondered if anyone has ever looked into what it would cost to set up a vinyl press somewhere in the UK?

I’ve no idea what it would cost to set up, or to run - or whether it would be profitable. So I’d be interested if anyone has ever looked into it or has any experience in the field.

It’d be great to have one just for independents somewhere if it doesn’t already exist.

I think some of the bottleneck issues have eased. MPO put on a new line and are taking back some of their old customers, and maybe even accepting new ones?

But regarding setting up a pressing plant, this video from Electronic Beats has some relevance.

This is a really interesting read:
Did the Music Business Just Kill the Vinyl Revival? (substack.com)

Crazy stat that only 50% of people who now buy records own a record player!

Nice one Hans this has all the info I was looking for.

I wasn’t expecting it to cost 1m Euros to set up though, that’s the end of my retirement plan!

That’s nuts, but not a shock from the major labels. Too bloated and lazy to make the effort, same as with A&R.

There was a guy here in Adelaide who bought a lathe and claimed he was starting a pressing plant. He got AU$250k in funding from the state govt. but 6 years later nothing seems to have come of it… I think the gear is up for sale now. Make him an offer, get some funding, and the cycle continues!

How much is it Hans?!

I’m in Singapore at the minute, but probably going to end up in Spain or if I’m not careful, back in the UK…

Actually not sure I’m sorry. A mate told me it was for sale and I’m assuming he came across it in a facebook group of some kind. I don’t do FB, and I can’t seem to find any listings for it via a bog-standard googling. The project was called Roundabout Records if that’s any use…

I did find this though: Record Pressing Plant Start up Costs - The Secret Society of Lathe Trolls

I thought the main thing making vinyl pressing so slow these days was the lack of facilities to cast the metal stampers from the lacquer masters. There’s plenty of mastering studios with lathes to do the cutting.
Don’t The Vinyl Factory in London have their own press?
I also remember reading about a pressing plant in Denmark that had the first new presses made in decades. Possibly even using some more efficient system for it .

in the late 90’s there was an opportunity to buy a lot of equipment from a vinyl pressing plant here in the states. I remember doing some back-of-the-napkin math on it and deciding that standing up a manufacturing facility for nearly any other type of product would be cheaper.

when raw materials, lubricants, water sourcing, power, space and shipping facilities were all factored in, it felt like an impossibility to break even. maybe it’s different now - but at the time, you’d have to have any failed parts custom machined and due to the age of these components, you’d have a lot of failed parts. any part failure would basically shut down production. oh and you’d either have to get up to speed real quick or spend a good amount of money hiring a shop boss with a lot of experience.

that’s not to say it couldn’t be done, but me and my group of goofball friends were not the people to do it.

This piece is real good. These guys had the same that you crazy dreamers have had but they seem to be making it work. The demand is certainly there, whether it’s profitable is another matter. 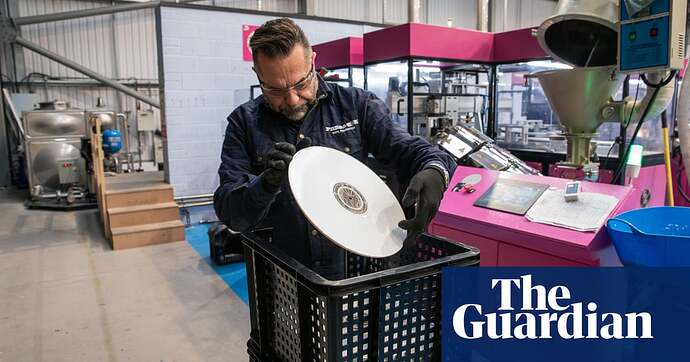 For the past year a Middlesbrough pressing plant has been helping artists make records, and there is no sign of demand slowing down

This is great Bill, well spotted. If I ever explore this further, they sound like they might be good people to speak to.

My idea was to make it only for independent / small labels if I ever get in a position to get it going.

Here’s another crazy idea. I’ve been convinced for the last 20+ years that a revival of the 7” single is possible. Something tangible that kids can spend their pocket money on. I think it could revive the pop charts as well.

Probably for a different thread!

Given the inexplicable popularity currently of cassette only releases, anything is possible!

Anyone want to invest in my MiniDisc manufacturing start-up?

I can’t tell if you’re joking