How I Program with Nikki Nair, Dec 1, Bristol 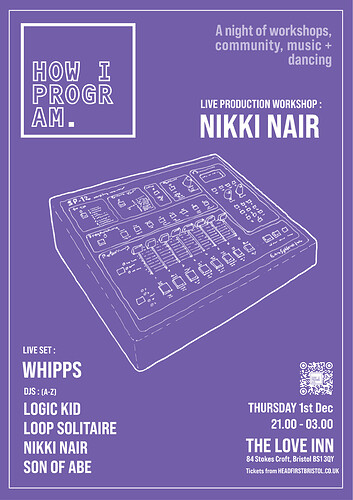 How I Program is an international community of DJs and Music Producers who love underground electronic music and club culture.

It began life in August 2020 when Bristol based Danny Berman aka Red Rack’em began mentoring Music Producer and DJs from across the world using a combination of Zoom and membership platform Patreon. Combining his decades of experience in dance music with well chosen monthly masterclass guests (including Cinthie, Nikki Nair, Ciel, Crazy P, Rick Wade, Posthuman, Adam Pits), How I Program quickly grew into an global community of likeminded music lovers supporting, communicating, collaborating and networking.

Producer and DJ Nikki Nair has quickly cemented himself as a respected new voice in the landscape of hybridized dance music. Nair’s productions encompass a multitude of club genres, highlighting his signature ability to effortlessly fuse electro, breaks, and elements of UK bass into a sound that is uniquely his own . Nikki’s releases have found homes on beloved dance labels such as Dirtybird, Scuffed, Pretty Weird, and Astrophonica. Nair kicked off Summer of 2022 by taking home the award for DJ Mag’s breakthrough North American producer in the award series’ inaugural year.

An electronic music producer from Nottingham, raised on disco 12” records and given drum sticks before he could use cutlery, Whipps understands just what it takes to create a great groove to get people dancing. Spending his early 20’s, hopping between London and Tokyo, an eclectic mix of experiences between the cities has clearly made a mark on his sound.

From ambient pastures to raging sub pop, there is inspiration to be taken. He’s part of the Duga records crew and his recent release ‘Pretty Casual’ picked up plays from loads of ace DJs - stand by for more Whipps in the future.

Logic Kid is an integral part of the How I Program crew, one of the trio behind Duga Records, expect to hear killer deep house plus disco and hip hop influenced grooves.

Loop solitaire is the pseudonym of dj and producer Mat crook hailing from Bristol in the UK. Heavily influenced by 80’s synth pop, electro, nineties rave and jungle. As well as bass heavy sounds that have helped put Bristol on the map. Recent releases ‘Words Won’t Come’ and ‘There Are Layers To This’ have impressed. He’s been an integral part of the How I Program community since day one and he’s continued to grow and grow as a producer throughout. Expect to hear raw breakbeats, bass, UK hardcore influences in his set.

His origins are hotly debated, but legend has it that Son of Abe was raised by a small tribe of acid monks in Patagonia in the early 1980s. What we do know is that, since that time, he has been highly successful at making people all over the world form fascinating rhythmical shapes with their bodies and pull peculiar faces (often late into the night). . . . . . A perfect nightcap of seedy acid house and techno awaits.