Heartwarming stories (not all DJ's are dicks)

Met 2 WAG-like Russian girls once who told me whilst on a holiday in Ibiza they took a break from the pickup scene in a low key bar. It was just them and a charming gentleman, in his own words a ‘music industry professional’, who went out of his way to let them have a good time, banter, drinks, what have you, with no indecent proposals. They had no idea who he was & they showed me photos of said night.

It was Sven Väth.

The former DJH forum was the place where I came in touch with two “monsters”: François Kevorkian and David Mancuso. Both replied to my messages in a simple, friendly way. To me it was just a bit unbelievable yet quite a normal affaire, as if I were sit in front of them with a glass of wine and a bunch of words coming out from our mouths…
This is the place.

1995 in the bogs at Star Bar in San Antonio trying my best to focus on achieving a pee in an unlocked cubicle circa 10am after Ku (Privilege by then?) and Brandon Block burst in with a Spanish fella he had by the throat. Then his mate came in too. Tight fit by this point. Something about being owe money. I stated my case that I was already in there and might I be excused, and I was.

Picked up Pal Joey from Berlin main station, and on the ride to his hotel he was a bit annoyed by two American girls who very talking VERY loudly. But instead of telling them off he politely asked where they came from as he could not put down their accent. “Alabama”, they said. “And where are you from?”, they asked. “I’M FROM NOOOOOOOOO YORK!” Joey proudly told them, and everybody else on the train. He then added that he was playing that night and invited them to come along and tell all their friends. At dinner shortly after he did the same with the staff and some guests. He was just so happy to be in town and so eager to play. His weighty musical legacy aside, he’s just lovely. I like him a whole lot. 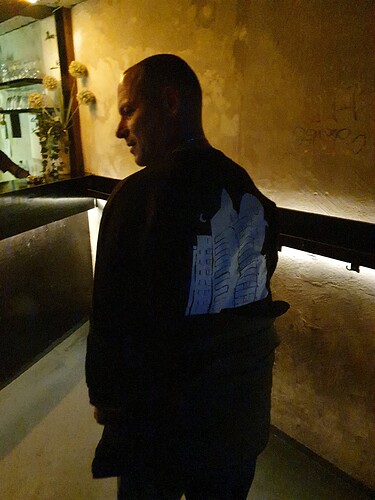 So, 2019 before lockdown, I was djing a chilled sort of night in a Hotel in Dublin when this lady sauntered up and asked me if I had any Leo Zero edits. As it Happened I did have one, which was his edit of Prefab Sprout’s “Bonny”. So I chucked it on. Turns out she was his neighbour! So she rang him!! He seemed very polite and didnt appear to mind that she had rang him “of a Friday”! He’s a sound fella!

Big Beat had just kicked off. I’d spent my first student loan on a set of 1210’s, completely unable to do them justice. But I spent a lot of money on good tunes.

All the ‘big’ DJ’s came to Glasgow. Norman, Stuart, Jon, Deadly and others. Bentley, Lo-Fi’s and other amazing bands.

There was something about Derek Dahlarge however. Amazing DJ. Produced some of my favourite records. Party animal. Troubled soul. A Londoner but somehow a Celtic man. There was a connection. Loads of them.

One night after playing The Arches in Glasgow, he came back to my brothers house for an afters. We stopped off at my (Mum’s) place (I was only about 19) in a taxi. We ran upstairs to get some records. He signed my Skint slipmats, even though he was a Wall of Sound Man. I was buzzing.

When we got to my brothers house, he got his record bag out and said I could have any record I wanted. I had just about every record he had that night (student loans) but he insisted I took Westbam - Alarm Clock, which I’d never heard before. It’s an amazing record. Unique.

Derek was buzzing to share the record. I was just buzzing. It’s a secret weapon for me to this day. He signed it before slipping into the dawn of a new Glasgow day after creating a night and morning to remember, hence my post.

Not long after, despite not being in touch since (before twitter etc), Derek saw a few of us waiting in the queue at Manumission as he got out a taxi for his set. Shouted us over, took us in with him and gave us plenty of drinks tokens.

He went on to play an amazing set in the back room as usual. I honestly can’t remember if I seen him DJing again after that. Big Beat was a crazy year or so. Maybe even less then when everything was just too fucking good. Before capitalism locked in. It was real. It felt real anyway.

Derek Dahlarge was and hopefully is a great guy. If anyone knows his whereabouts, I’d
Love to buy him a beer x

Bumped into Antal in a record store and he was very nice. Bought half the store, so fingers had to be quick.

amazing tale, just the perfect opposite of “never meet your idols”.

Though I’m a whitish hillbilly from the middle of farm country here in insanely segregated USA, I’ve become lasting friends with Sean Smith (Smooth Agent Records; Southside Chicago). A number of years ago he invited me to a very intimate BBQ at his house that was dominated by real deal chicago house royalty- Bernard Badie, Brian Harden, DJ Pap, DJ Quad, Dovie Cote, among others. Sometime mid-day, in walks Larry Heard.

12028680_1583083538580913_7411702348724360118_o1120×403 68.6 KB
After he’d done the rounds and settled in, I summoned the courage to introduce myself and express my admiration. He was humble as could be and sincerely wanted to hear all about my farming operation and where I live more than he wanted to talk about himself. We all hung out, listened to records and he signed a bunch of Sean’s Fingers vinyl. When he left he sought be out and gave me a hug. A few days later he found me on facebook and has since listened to and complimented my mixes, sent me some tunes, and every damn year he sends me a birthday greeting. Mindblowing class act. I’ve named a steer after him